The Last Godfather is the epic inside story of Joseph Massino, the mob boss of New York’s infamous Bonanno crime family for more than 20 years, who is believed responsible for more than ten murders and a crime wave of theft, extortion, illegal gambling, and loansharking. Ultimately Massino was betrayed by his closest friend, underboss, and brother-in-law, Salvatore Vitale. Based on interviews with Massino’s family and friends, as well as law enforcement officials and confidential sources, The Last Godfather tells this incendiary true story and for the first time reveals: The close relationship between Joseph Massino and John Gotti How Massino set up the 1981 execution of three rival Bonanno crime family captains in a Brooklyn social club The bloody mob war of 1980-81 that brought Massino to power and how, after the imprisonment of John Gotti and Vincent « Vinnie the Chin » Gigante, Massino emerged as the most powerful gangster in America How Massino was involved in the murder of Sonny Black, an incident portrayed in the film Donnie Brasco. 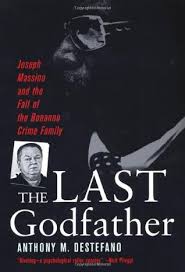