Book 1 – THE ORC KING – The uneasy peace between the dwarves of Mithral Hall and the orcs of the Kingdom of Many Arrows begins to falter as the tribes of orcs under the command of Obould begin to battle one another, and Bruenor becomes determined to finish the war that had nearly destroyed him, in a new volume in the saga of dark elf Drizzt Do’Urden and his companions. 171,000 first printing.

Book 2 – THE PIRATE KING – Drizzt returns to Luskan, and the Realms will never be the same!The Arcane Brotherhood has long held the city of Luskan in their power, but when corruption eats away at their ranks, Captain Deudermont comes to the rescue of a city that has become a safe haven for the Sword Coast’s most dangerous pirates. But rescuing a city from itself may not be as easy as Deudermont thinks, and when Drizzt can’t talk him out of it, he’ll be forced to help.Drizzt is back in action again, and bringing more changes to the Forgotten Realms setting. This all new hardcover adventure will keep Drizzt fans guessing the whole way, with edge-of-your-seat action and plot twists that even the most casual reader of the Forgotten Realms novel line can’t afford to miss!

Book 3 – THE GHOST KING – A final installment of the Transitions trilogy sees Drizzt and his companions seeking the help of the priest Cadderly, leading Drizzt to face his most powerful and elusive foe, the twisted Crenshinibon, the demonic Crystal Shard that Drizzt believed had been destroyed years ago, in a novel by the best-selling author of The Pirate King. 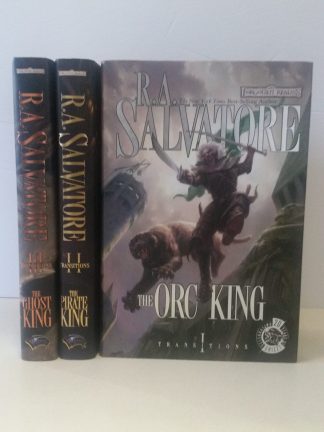